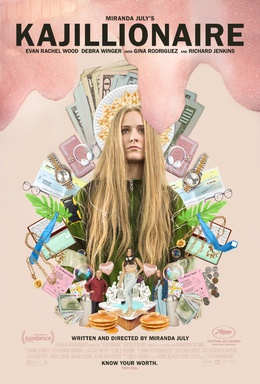 The third feature from Miranda July, Kajillionaire is a surreal look at the life of Old Dolio Dyne (Evan Rachel Wood), named for a homeless lottery winner who the parents hoped would leave her money in his will. Sadly, we’re told, he spent it on experimental cancer treatments.

The quirky tale explores the strange lives of the Dyne family, conning their way through Los Angeles, stealing mail, forging signatures and living in a basement office which regularly floods with bubbles trickling down from a factory above. The actors play up the weirdness brilliantly, particularly Richard Jenkins, but the star has to be Evan Rachel Wood, who’s stubbornly suspended in an emotional prison of arrested development.

Gina Rodriguez plays the whirlwind of Melanie who flies into their life and mixes up the family’s very precise routines and chemistry, which Wood’s Old Dolio is so reliant upon. It’s hard not to see Melanie as the outsider, or the viewer – a normal person thrown into the kooky, surreal and bizarre world of Miranda July. Rodriquez brings charm, humour and strength to a role that works brilliantly in grounding a film in need of an anchor of realism.

Kajillionaire seems to set up the question – is the family in just a long-con – are familial bonds true or just a means to control, dominate and trick others? Either way, Wood’s Old Dolio is in much need of an outside perspective, and that’s where her intriguing journey with Rodriguez’s Melanie shines most. Definitely the most accessible of Miranda July’s catalogue, this is a strange, surreal and charming fairy tale of a lost woman trapped by her family, her upbringing and herself, and in much need of rescuing.