Infinite (2021) Film Review – The big idea of the film is what if people were reborn with their past memories, essentially living forever, except through different bodies? 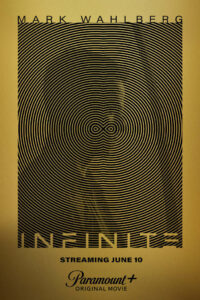 Infinite, the latest film from Antoine Fuqua, is an intriguing example of how a really interesting concept and top notch script can get bogged down in production and sadly ‘blandified’ beyond all recognition. The concept, originally taken from The Reincarnationist Papers, is given an action refresh, moving from a serious philosophical piece to a more Fast & Furious-style romp.

The big idea of the film is what if people were reborn with their past memories, essentially living forever, except through different bodies? Now, this has been done before, but the little things they nod to in the film, such as the characters’ flashes of memories across the centuries and references to major historical events, suggest that angle could have been a lot more fun to explore beyond the thrill ride that movie soon becomes.

That said, it’s an exciting ride, and there are more than enough set pieces to shake a stick at,  all well executed, with just enough originality to make it worth your while. The best example of this is the armoured car chase through a police station, which screamed originality and gave off a general ‘what the hell will happen next’ feel to the film as it veers towards another death-defying moment.

The acting is workable, but again, it feels like some better casting would have resulted in more pathos and character development. The standout performance is without a doubt, Chiwetel Ejiofor as the menacing Bathurst, who looms over the story, and hams up the part when necessary, with a touch of Shakespearian eloquence. On top of that, Jason Mantzoukas’ screwball Artisan adds some much-needed levity in his far-too-few appearances. Mark Wahlberg is serviceable as the part-everyman who the audience can relate to and follow, but when you leave your rather convoluted exposition to Wahlberg, you’ve got a problem.

Infinite will offer you an entertaining thrill ride over 106 minutes, without requiring much thought, and that’s the main takeaway – with a concept like this, having a bit more thoughtfulness, playfulness and fun with it, would have gone a long way to making something a lot more memorable.