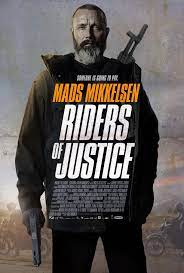 Riders of Justice is a dark dark dark revenge comedy that remarkably manages to warm the heart amid the gut punching f*cked-up-ness and bouts of nihilism. Mads Mikkelsen is incredible as the brooding, angry Marcus, who pummels and shoots his way through much of the movie, while his bumbling trio of sidekicks grapple with their own messed up lives and coming to terms with dealing with their past. Despite Marcus’ demons, Mikkelsen’s portrayal makes the character extremely compelling to watch, a man broken inside who can only respond through what he knows best – violence.

The film twists and turns in its genre, moving from mystery to action to satire and tragicomedy, often within two or three scenes. There’s a lot of odd character moments from Nikolaj Lie Kaas’ Otto, Lars Brygmann’s Lennart and Nicolas Bro’s Emmenthaler, which pay off in little ways as you progress through the film. On top of this, the violence is extremely vivid and comes right out of the blue, amid laughs and pathos, creating a very surreal sense of narrative.

Some of the best moments in the film are the family-style setting that emerges, as the trio move in with Marcus under the guise of pretending to be psychologists for Marcus and his daughter, in response to the loss of his wife and her mother. The playful acting from the characters adds another level of distortion to this rather confused film, and makes it all the better. While the ending unravels into an all-out murder-fest, the characters and great performances hold it together, and we’re lucky enough to be witness to some amazing festive apparel before the credits roll.