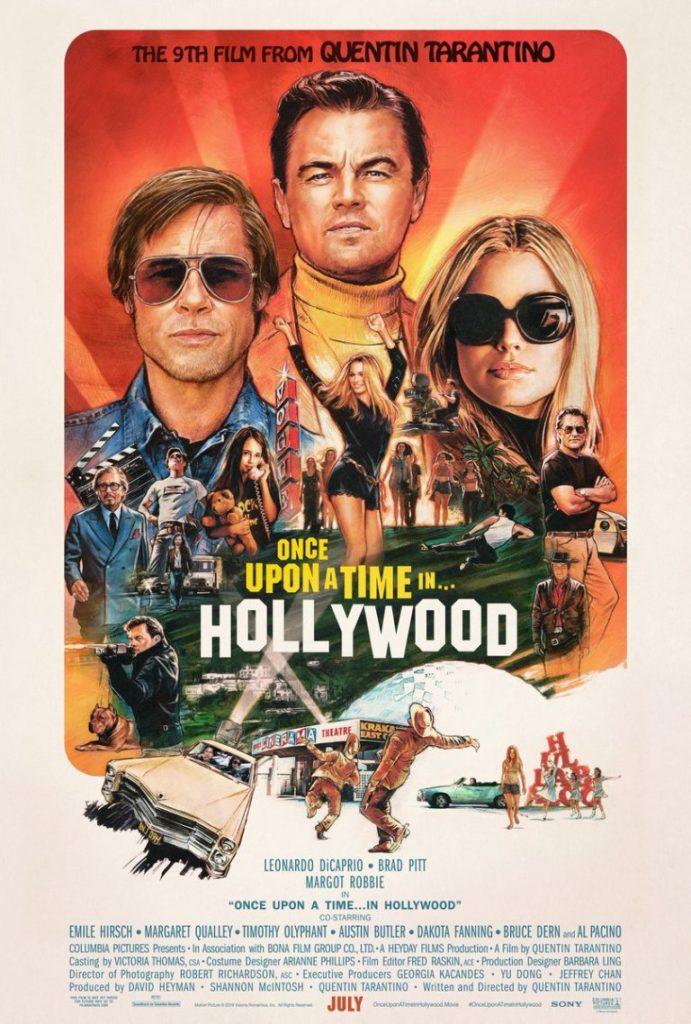 Tarantino has returned, and he’s still doing that cowboy schtick, but this time it’s not the real thing like in The Hateful Eight or Django Unchained, but actors doing the cowboy thing in late 1960s Hollywood. Throw in the tragedy of the Manson Family and the Tate murders and you’ve got yourself Once Upon a Time In Hollywood. Firstly, go read up on the Manson Family or Tate Murders before you sit down to enjoy this one – you don’t need to know much, but just an outline will allow you to appreciate the backdrop.

Now, down to business, the film business that is. Tarantino’s love for the movie industry, particularly in the 50 and 60s, oozes out of this picture. It’s his fairy tale send off to a bygone era, and it does a pretty damn good job of it.
You’ve got Leonardo DiCaprio as a washed-up TV cowboy Rick Dalton plying his way through guest spots hoping to resurrect his former glory. This allows Tarantino to play at director of several genres, whether its mini TV Westerns, action adventure films, or even reinserting Leo into some rather famous classics.

Dalton’s stuntman Cliff Booth, aptly played by Brad Pitt is Leo’s partner in crime, whether taking the punches, driving him around or just fixing stuff around his house. While Dalton’s tale takes him on a reflective journey surrounding his success and future, Booth’s adventures drive the major story and take him on an exploration of hippie culture and the Manson family, which ties into the Sharon Tate plotline, well helmed by Margot Robbie.
Not getting too much into spoilers, this film heavily channels Pulp Fiction’s interlocking mini stories, with some incredible memorable scenes which could easily stand by themselves as shorts. Unlike that 1994 classic, the dialogue in Once Upon A Time in Hollywood is a lot more relaxed, no longer are scenes bursting full of witty dialogue, but there’s a more relaxed conversation style, added to the fact that some scenes were improvised – a relatively rare concept for Tarantino.

Coming in at just over 2 hours and 40 minutes, the film is in no way means bloated (apparently the original cut was 4 hours), but everything is perfectly balanced towards its aim. There’s a long scene that literally drips in tension, added to by the fact much of it is in the bright sunshine, which then turns into a darkly lit, isolated and anxiety-ridden moment. Sections like this are perfectly timed and balanced to create that punch-in-the-gut emotional connection that many big blockbuster films no longer aim to instil in the viewer. Overall, it’s so rare to have scenes where the actors can just ham it up and revel in the dialogue and interactions they’re gifted by the writer, and DiCaprio, Pitt and Tate all excel here – Pitt is the sure-fire star though, radiating with charisma, charm and playfulness, particularly in the backlot fight scene.

Would it have worked better with say a washed-up actor like Charlie Sheen, Christian Slater, or even Brendan Fraser? Who knows, but it may have lessened the comedic effect of having Leo bumbling through his lines, coughing his guts up and generally falling apart. The film also heavily focuses on Leo and Brad’s characters – their story, chemistry and acting works so well together that you could have released their tale on its own without any of the Manson murder backdrop, which feels slightly tacked on in places, but understandably sets the scene.
This isn’t a perfect film, or even the perfect Tarantino film, but it’s a picture that looks, feels and drips in dedication, excitement and just darn good celluloid fun.