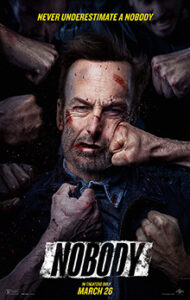 You can never go wrong with Bob Odenkirk, right? Well, that’s the logic behind why I sat down to watch his latest movie, the action killathon that is Nobody.

Odenkirk plays Hutch Mansell, a man seemingly stuck in a rut at a 9-5 and mocked by pretty much everyone, including his wife and son.

However, a chance break-in at his house reveals there’s a lot more to the straight-laced man than we were initially led to believe. Hutch flips back into killer assassin mode, cripples a mob boss’s brother and things escalate. A lot.

From the writer of John Wick, you get a one-man killing machine employing an eye-openingly fun variety of different ways to kill the bad guys. It’s exciting, extremely well-paced, and Odenkirk is superb, channelling droll humour and world-weariness to perfect effect, on top of some real stunt prowess.

As you’d expect, the fight choreography is top-notch, with innovative set pieces really pushing action film making to the limit, without too much dependence on special effects, which always adds a little bit more magic and weight to the film.

But it’s not just a one-man show, with Connie Nielsen offering up fantastic chemistry, RZA speaking volumes despite a relatively small part, and Christopher Lloyd as Hutch’s adorable dad.

A simple, fun and extremely effective Saturday night action thriller, and one we may be lucky enough to get a sequel to in the future.