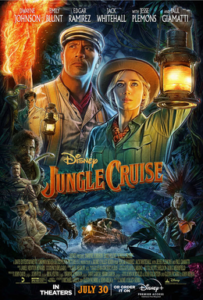 Jungle Cruise is the latest in Disney’s roster of live action-adventure films and an obvious attempt at returning to its previous glories of power film franchises like Pirates of the Caribbean. So does it channel the success of Jack Sparrow and co, or is it more of a John Carter or Lone Ranger?

The idea is a promising one, and the two leads give enough energy and excitement to their roles, but aside from the boat ride itself, there’s too much meandering in the shallows to really get the audience on the edge of their seat. One of the main issues is the huge numbers of films Jungle Cruise draws from – you’ve got the lead trio mirroring the cast of the Mummy, nods to everything from Indiana Jones to the African Queen, Aguirre and Fitzcarraldo to Romancing the Stone, plus fantasy elements and snake-filled zombies that could have been directly lifted from Pirates of the Caribbean. All these similarities mean the film doesn’t have room to breathe on its own and is stuck in the shadow of other people’s ideas.

That said, there’s a lot to enjoy, there’s cheerful camaraderie galore between Blunt’s Lily and Johnson’s Frank, while the latter steals the show with his theme park-style hosting duties, fleecing tourists for money on his river cruises. Plemons gives a fun star turn in his brief scenes as the over the top bad guy aristocrat Joachim who pursues our heroes down the Amazon. The less said about the other antagonists the better, especially the CGI-filled fest of an ending action sequence which drags the film down considerably.

Aside from that special effects-laden section at the end, the cinematography is bright, vivid and captures the sense of wonder as we’re drawn into the majesty of the rainforest, and the little touch of a silent film camera moment is particularly endearing. There’s also a fair few moments of comedic action which work well, thanks in no small part to the charisma of the leads, but nothing really shines in the way to get you fully invested. Part of this is down to the characters themselves, who are little more than threadbare caricatures, with just enough characteristics to give some sense of personality, but just not enough to give the audience a reason to care, especially in the early sections of the film.

While there’s some charm and joy to be found on this theme park ride, Jungle Cruise is a confused mood board of classic adventure films that doesn’t really know what direction it wants to go in. It’s a shame, as the adventure genre has been lacking of late, and pulling this one off well could have been the shock in the arm this style of film could definitely do with.