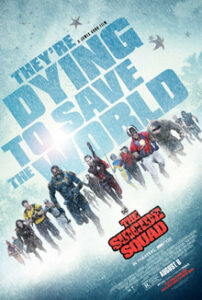 Does James Gunn’s gamble to reboot a film that was only released 5 years ago pay off, or is it a bit of a misfire? Surprisingly, it’s a remarkably successful reinvigoration of a formula that didn’t quite gel before – it’s colourfully vivid, incredibly violent and most importantly, fun. The film feels like the mirror universe version of Guardians of the Galaxy – pumping rock/pop songs, clever gags and small furry CGI creatures, but instead of a bunch of misfits with a heart, this gang of reprobates with bizarre powers probably has just one heart to share between them.

There’s some incredibly fun visual set-pieces, such as the carnage-a-thon from Harley Quinn where the bodies explode with colourful flowers instead of blood, King Shark’s playful encounter with multi-coloured aquatic leeches and pretty much any time Polka Dot Man flexes his powers. One of the best things about the incredibly enticing and intense opening beach assault is the way the action and threat combine with the comedy from when some of the characters, like Nathan Fillion’s The Detachable Kid, finally decide to use their powers.

Idris Elba doesn’t have a lot to work with, but he’s superb as a gruff, old-action hero leader, while Margot Robbie gets the film-stealing scenes and doesn’t disappoint. David Dastmalchian brings quiet, introspective energy to his troubled Polka-Dot Man, Stallone does his few-syllables thing as King Shark and a big shout out has to go to Julio Cesar Ruiz, who plays the team’s fixer Milton, who, most importantly, brings the team empanadas in their time of need.

While the film grinds slightly to a halt in its rather slow third act, as is often the case with epic-battle heavy superhero films, the finale is more than satisfying, and mostly pays off in the lightweight emotional stakes. What’s important here is there is enough back-story to make you care about the fate of the squad, something that was severely lacking in the earlier 2016 entry in this series.